Alberta leads the country in increased in food bank use

Food bank usage was up marginally across Canada this year, but the picture in Alberta was a stark contrast, with an increase of more than 23% over 2014.

According to national HungerCount statistics released today in Ottawa, Alberta experienced the highest jump nationally with a record 67,443 people accessing a food bank during the month of March. The national increase in food bank use was just 1.3%.

“Sadly, the surge was not wholly unexpected because the economic landscape in Alberta has changed drastically over the last 18 months,” says Stephanie Rigby, executive director of Alberta Food Banks, the provincial food bank association.

The provincial job market has tightened. In addition to layoffs, workers are not retiring as early as they used to, seniors are returning to the workforce and the business closures are forcing household incomes down. In spite of the job losses and income reductions, the costs of consumer goods have remained high or have increased, and the cost of housing remains very high.

These adjustments have placed huge pressures on lower skilled workers and modest income families to earn enough to survive. Many families have fallen further behind and many are forced to turn to food banks for support.

One-third of those using food banks in Alberta report they are working – that is more than two times the national average. What type of income someone is making matters a great deal.

“There are stumbling blocks that hinder people from moving forward,” says Ms. Rigby. “These can be removed through access to re-training, education, and grant funding for training programs to address root causes of food insecurity for the most vulnerable – the working poor, the unemployed, and the underemployed.”

While 18 food banks initially reported decreases in March, by summer many of those were facing a very different state.

In St. Albert, where numbers had fallen steadily for the past year, due in part to their solution-focused approach to food insecurity, June’s numbers jumped and were the highest on record for that month in 8 years.

“We saw our first increase in food bank use in late spring and that demand has continued to grow month after month over last year’s figures,” says Suzan Krecsy, executive director of the St. Albert Food Bank.

Food banks are increasingly broadening their scope to help address the root causes of hunger.

“Food banks have recognized collecting and sharing food alone is not the answer. Many now work proactively to connect people with programs and help move them out of food insecurity,” says Ms. Rigby.

For many food banks it is not within their reach to provide enhanced services, especially when usage increases have stretched their capacity.

Ten percent of food banks in Alberta reported they ran out of food at one point in the last year, forcing more than half of those food banks to purchase more food and one-third to shrink the size of the hampers they offered.

More than half the food banks in Alberta are completely run by volunteers and all rely primarily on public donations to support their work.

It has now been seven years since food bank use in this province reached a low point of 33,837 individuals in March 2008. The need for food banks spiked drastically in 2009 and has hovered at record levels ever since.

“We need to start a new conversation in Alberta to determine the best course of action to tackle food security challenges,” says Ms. Rigby.

“Our food banks feed thousands every day but we want to move past that and cooperatively find solutions for people to overcome the challenges that brought them to the food bank in the first place.” 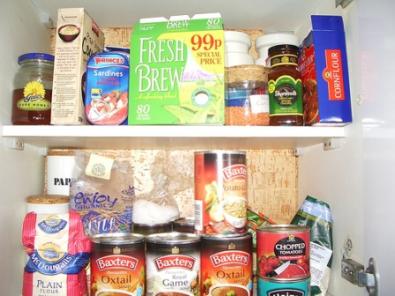